Dames and Daredevils for Democracy

'A Bright Progressive Band' they were called.

DAMES & DAREDEVILS FOR DEMOCRACY is a presentation that charts the development of Women’s Suffrage in Australia through ten strategies & featuring ten prominent Australian suffragists.

The progress is marked by their lives, their actions, their artistic products and by songs.

Created by Phyl Lobl the production shows just what ‘grand dames and daredevils ’ they were. They took us from the Hat Box to the Ballot Box and then helped women in England and America get there too. They were daring, resilient, intelligent and compassionate yet very few Australians know their names. 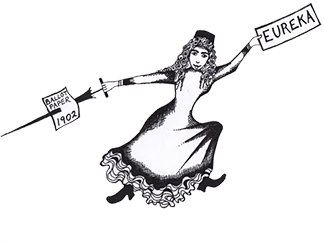 They, and the ‘good blokes’ who helped are shown, and the ‘others‘ who opposed are exposed through images and through quotes so ironic that in hindsight they are funny.

The production DAMES AND DAREDEVILS FOR DEMOCRACY combines Music Theatre with Documentary material. The result is a performance that entertains and informs. Talented performers reveal the time-line of the strategies used to gain emancipation for women in Australia.

Some of these women went on to assist British and American women to gain their voting rights... not the other way round as is often assumed.

The production uses monologues, songs, poems, quotes, cartoons and images of women and men who were engaged in a struggle that took decades.

It is important, almost forgotten, Australian history, made easy to digest.

It was first performed at the NATIONAL FOLK FESTIVAL in Canberra at Easter 2013.
The second performance was in Kiama Pavilion 10th November 2013.

The objectives of this site are: 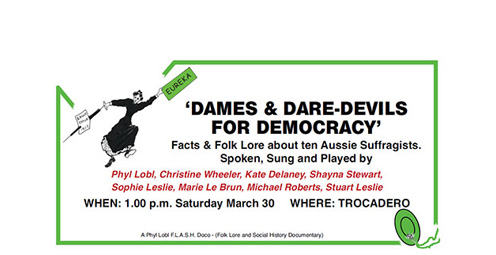 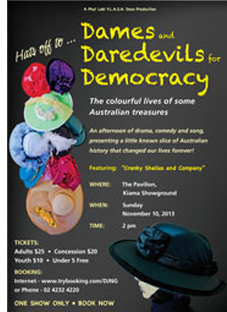